Wind in the Willows

Wind in the Willows

This page is regularly updated, please select here to view the latest version. 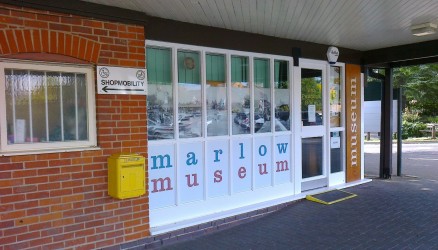 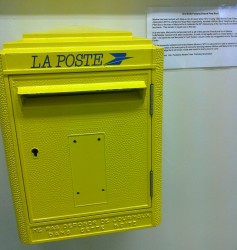 Have you ever wondered or even noticed the bright yellow French Post Box on the wall of the Marlow Museum? How did it get there, why is it there and what is it used for?

It is a long story, but very interesting and patriotic. Taking the last question first (why not) the post box is the means of passing post or messages to the Museum. We use it as our incoming mail point as we do not have a letterbox in or by the door. The Leisure Centre often took our mail for us but that was not always convenient and any papers slipped under our door were often wet or dirty. So we needed a proper letter box. In the museum we already had this French Post Box so we decided, why not use it? We regularly check it for content and it provides a talking point as well as promoting Marlow’s association with Marly le Roi at Town Twinning. We are also twinned with Buda (of Budapest) in Hungary but that’s another story (no post box yet!).

So to the story of the yellow box. In about 1990 Dennis Sargeant of MTTA asked Marly le Roi Deputy Mayor, Patrick Gautier Lynham, a good friend and regular visitor to our town, for some help concerning a float they were organising for the September Carnival in Marlow. Patrick kindly arranged for a scale 1 replica of one of Marly’s famous horses (you may have seen a picture of them in the Liston Hall) to come to Marlow. Their travel was another story on its own.

In 1992 to thank Marly and Patrick for this assistance a red British Telephone Box was acquired by MTTA and taken to France. Two years later the Marlow Town Mayor at the time, Cllr Maurice Oram, a past postman, suggested to Patrick that the British telephone box really needed a red British Post Box for company. Not surprisingly one was supplied. At that time arrangements were being made to ‘twin’ the Marly and Marlow postal staff.  A few months later a group of Marly le Roi French Postmen came to Marlow and presented a yellow French Post Box to their British colleagues in Marlow.

So that’s how this bright yellow box came to be here. Once the Marlow Museum was opened 11 years ago, what better place to home it and put it to good use than at the museum.

BUT please do not put your letters or postcards in it wherever they are addressed to, as they will not go far. There is a red post box on the Causeway which if not as attractive as our yellow box, will ensure proper despatch and delivery. 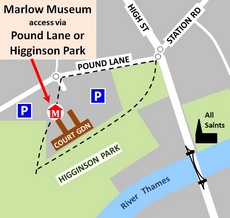 Thank you to these organisations

Become a Friend and/or Member of Marlow Museum. .. read more

(for most small images - select image to enlarge)